As the first few days of this crisis hit and people began quarantining in their homes in an effort to "flatten the curve" in 2020, I immediately felt that this was one of those events that changes the course of human history. I wrote to some of my professional colleagues in those momentous first days that I believed that future historians would write about a pre- and post-corona world. One colleague responded to me by saying that we had gone through several crises in our lifetime - 9/11 and the financial crash of 2008/2009 - and not much changed in the way society functions.

Why should this time be different?

We have gone through various waves of variants and are finally seeing the light at the end of the tunnel out of the pandemic. I believe that we have collectively sensed that this crisis was different from previous crises. In none of the previous crises have people across the globe been subjected to changing the way they spend time with family, teach their children, communicate with each other, work together, and travel (or better said don't travel). These imposed behavioral changes were shared by BILLIONS of people across the globe. I believe we have to go back to World War II to find a relatively recent comparable episode in human history which impacted so many people in similar ways at the same time. 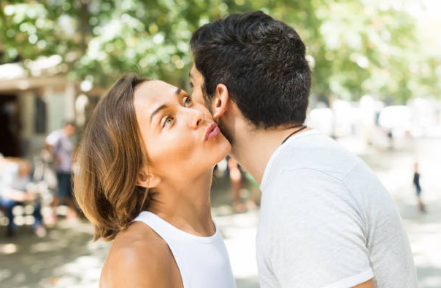 As countries and economies re-emerge out of the Corona pandemic, there will be a great temptation will be great to return to life as we knew it (aka "The new normal"), The virus (and its numerous variants) has made this journey much longer than anyone could imagine. We have all experienced resurgences in the contagion which led to further shutdowns (most localized). Certainly former cultural norms such as handshakes and the European penchant to kiss your acquaintances on both cheeks will certainly have a comeback.

What is struggling to emerge?

This crisis caused untold sorrows for millions who have lost loved ones and significant dislocations for those suffering from the impact on the economy. This suffering will reverberate throughout society in the months and years to come. I shudder at the long-term toll this will take on individuals, families, communities and society. 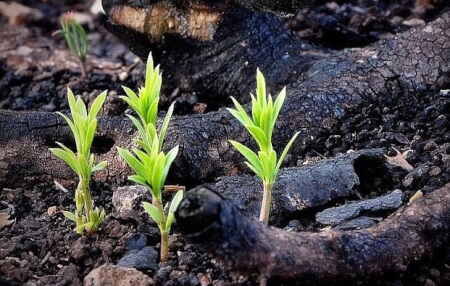 However with every crisis there is an accompanying opportunity. It is like a forest fire which in the wake of its destruction makes room for new growth. The most important question I believe we have confronting us at this moment is:

How will we take advantage of this singular moment in human history to improve our destiny?

The stakes could not be higher and there is no guarantee that the change will be for the better. After all, the Great Depression of the 1930s was an incubator for fascism.

How can we get it right this time?

A Ray of Hope

I for one see a ray of hope in some of the collective action and awareness which we are witnessing across the globe. During the pandemic, connections happened on a local scale in neighborhoods which would not have happened previously. Many of our neighbors gathered for months 9 p.m. to give thanks to the essential workers who were doing their jobs on the front line and keeping the rest of us safe. This resulted in getting to know some of our neighbors in the apartment complex across the street.

In our own apartment complex "Apero-Sunday" was initiated. Every Sunday at 6 p.m. the inhabitants of our building appeared on their balconies with a cocktail of their choice. We wished each other continued health, well-being and continued to chat for about 30 minutes. I have never been so well informed on how each of my neighbors is doing! The "Apero-Sunday" is infectious; little by little people from adjacent buildings are joined us in this Sunday ritual. 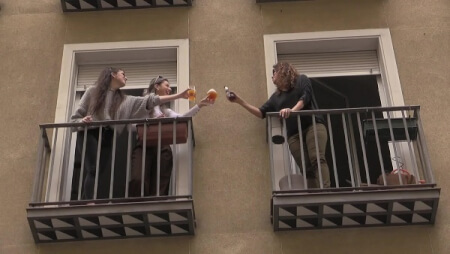 The other phenomenon which has touched my heart came from musicians. Quarantined, isolated, unable to perform on stage, they found ways to reach us. I believe a new art form may have been born - remote choirs and remote orchestras.

One example which literally brought me to tears occurred early on during the crisis. As Italy was the epicenter of the pandemic, a choir sung the chorus overture to Verdi's opera Nabucco. It was a symbolic masterpiece. The opera Nabucco is seen by many scholars to represent the Italian Risorgimento in the 19th century which led to the unification of Italy. The song itself - known as the "Chorus of the Hebrew Slaves" - moans about their current suffering and longs for the country they have lost. This specific artistic performance was dedicated to the medical workers of Italy. 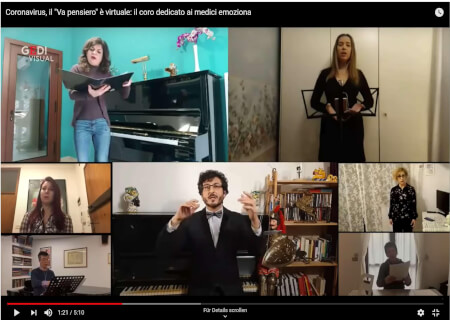 Ever since I watched that video, my YouTube feed has been filled with a myriad of similar offerings - not only from choirs, but also from orchestras, rock bands and jazz musicians from all over the world. I have had the opportunity to enjoy productions from places like Australia, Thailand and Senegal. Perhaps most important of all, amateur groups have joined the fray and people - quite literally from all over the world - have been singing together.  (Take a look at an example of people from 15 different countries singing together).

Setting my stake in the ground

If we want to create a different world,
we need to articulate what this world will look like.

On the basis of these two examples, I would like to share my vision for a post-corona world. If we want to create a different world, we need to articulate what this world will look like. For me this new world can be built around what might at first appear a paradox: individuals who are part of strong local communities and, at the same time, interconnected with the rest of humanity on a planetary scale through the virtues of technology. If we see that this is possible, why would it be desirable (maybe even necessary)?

This may seem like an inordinately simple analysis, but I believe that at the center of what afflicts humanity today is a rampant uncontrolled individualism. At the heart of our current economic model is Adam Smith's "enlightened self-interest" which is working like an "invisible hand" to magically provide the best social outcomes for all. This thinking from the 18th century has had an incredibly beneficial impact on humanity - leading to the acknowledgement and protection of individual rights, freedom of choice, personal dignity and robust self-reliance. It has also unleashed economic productivity the likes of which have never been seen previously. In my opinion however, this kind of thinking has gone too far. It doesn't need to be replaced - but it does require a counterbalance.

Physics and biology tell us that everything is interconnected.  A wonderful image of this inter-connectedness was provided by David Bohm who is acknowledged to be one of most significant theoretical scientists of the 20th century.  He said that the most fundamental particles are like waves in an ocean. As they rise up, they seem to be individual objects, but they are really just part of the ocean. So it is with the fundamental particles in nature. They appear independent, but they are actually all interconnected. If particles at the most fundamental level are interconnected - it follows - then so are we.

Yet this reality of inter-connectedness is not reflective of how we currently behave in society. We act as though we were completely autonomous - as if we did not depend on anything else but our own capabilities. This pandemic revealed this fallacy as we realized that without the so-called "essential workers", society would not function.

Unfortunately this illusion of autonomy has some very serious drawbacks. An example of one of those serious drawbacks (spoiler alert - there are many more) is the rise of loneliness in modern society. With each one of us going about our lives as though we were independent of everyone else, a curious phenomenon has taken place. Despite the fact that there are approximately 8 billion people on the planet and that through the internet we are more connected than ever, there has been a steady rise in self-reported loneliness in all major countries. Such loneliness can lead to depression, mental illness and to destructive behaviors such as substance abuse.

As an antidote to rampant individualism, I offer two ideas for a better tomorrow. Most of us live in neighborhoods surrounded by myriads of people who for the most part remain anonymous. In my opinion, creating a healthier society should begin by connecting with those people who are physically closest to us - our neighbors. Why not institute an "Apero-Sunday" as a regular way to keep in touch? Or better yet, why not create spaces and build neighborhoods around areas for people to meet and interact locally?

A conscious effort to strengthen local communities could lead to completely new ways of structuring our living environments and transform our interaction with neighbors. I am aware that many cities have projects and initiatives to strengthen local communities. What I am proposing here is not just a random architectural or urban planning project or a pro-active community center, but a complete re-thinking of how we live with the people surrounding us. This requires not only new concepts of spaces but also providing the opportunity for meaningful interactions. In other words, it requires neighborhoods which are conceived and planned with the meaningful interaction of the community as its central focal point. 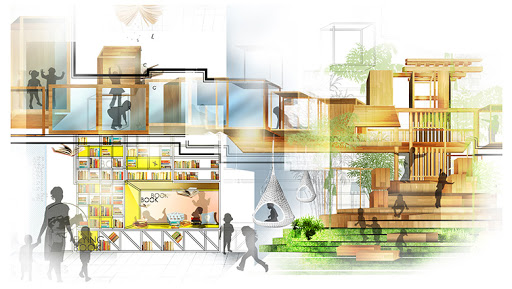 On the other end of the spectrum, with the help of technology we can foster human connection literally all over the planet. Typically we look at learning as an individual activity. We study, learn alone and take tests alone to measure our progress. There is nothing wrong with this approach. However as the world becomes more complex, we have begun to realize that individual learning may not be sufficient and lifelong learning is a necessity to focus on the challenges which lie ahead.

Social learning has been shown to be one of the most effective ways of learning. We can and should create a culture of learning with and from each other which can literally take place on a planetary scale. 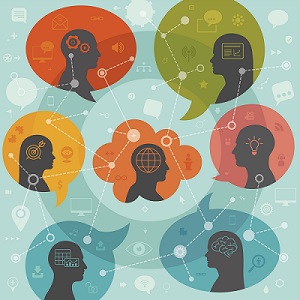 This is not the time to be timid. We live in an historical time. This Corona pandemic was only one of the major phenomena which shook the foundations of our civilization. Climate change and social inequality equally threaten our way of living. Digitalization promises to upend all of our previous concepts about how we work together. It is a time to be bold and to create the future we want to see emerge. During the course of history there are times when people have arisen to redefine the society in which they live.

This is our opportunity.

Through the use of innovative practices in the context of our four thematic focal points - Learning together, Network Leadership, Fluid Collaboration and Transparent Communication - new sources of energy are released throughout an organization and the internal information flows enhanced.