Visionary leaders focus on the impact of networks

By that as it may, the cutting-edge leadership paradigm has another focus on the level of the network through Network Leadership.

Fostering such a novel approach to leadership from the network perspective requires fundamental shifts from the long-established and classical leadership development practice. 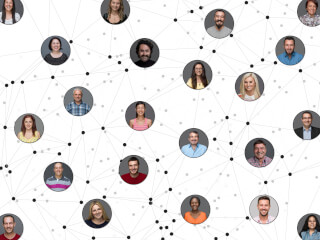 How can Network Leadership be promoted?

1. It is fundamental that the selection process of the emergent leaders is based on the network dynamics in the organization.

2. A conscious focus on the leadership development practices is based not only on skill development but also on a deeper awareness of networks within organizations.

The selection of emergent Network Leaders looks different from traditional selection processes of high potential leaders in an organization.

From a network perspective, leadership development needs to take place in the critical zones of a network, i.e. where the important interconnections of the network exist. This is where the greatest potential value to the organization is located. In the example of Apple described in a previous blog,  this critical zone would include the camera team as well as the senior design leaders, sensor software and UX-Design groups. New leadership capabilities are required to nurture effective interaction between diverse groups.

The science of Organizational Network Analysis (ONA) reveals where these zones could be located within an organization. These maps help to identify the flow of information and energy within the networks.

The following example of a network map highlights a type of network which is often found within organizations. The diagram outlines how information flows among a set of interconnected people. This type of network is known as the hub-and-spoke network. 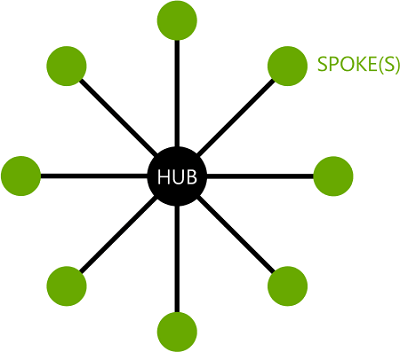 In this type of network, information flows through a central leader, expert or team who are located in the diagram as the hub. The spokes which emerge from the hub, all act as silos which are independent of one another. Any necessary co-ordination is directed from the hub.

When does this type of hub-and-spoke network manifest itself?

One example is the formation of new groups after the completion of an acquisition of a business. This type of network may also originate from certain habits and behaviors, such as a strict command-and-control mindset or an individual's excessive ego.

These kinds of networks generally have various negative effects on collaboration. Hub-and- spoke networks often prevent innovation by constraining the flow of information. As a result, unhealthy feedback patterns tend to emerge; only those ideas which reach the central hub are considered. The central hub also functions as a noticeable bottleneck. Timely decision making is impaired due to the overwhelming co-ordination work which is required of the central hub.

Once the critical network zone is identified, a leadership development process can be incorporated into the workplace.

Network Leadership Development is grounded on the principle that "awareness is the greatest agent for change" . When the system is able to see itself, shifts happen. 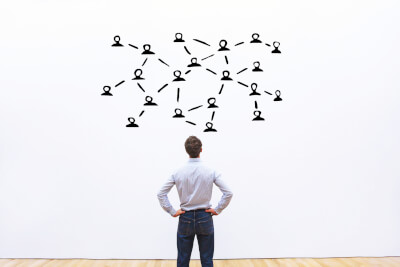 How to bring leadership development back into the workplace

Leadership Reconnaissance compel us to re-think how and where leadership development should take place. Leadership Reconnaissance brings leadership development back into the day-to-day workplace while concurrently enabling a team of leaders to collectively address and resolve key business challenges. During the process of discovering viable solutions to a specific business issue, these leaders cultivate their personal leadership capacity in real time and develop skills in their own work environment.

To support Leadership Reconnaissance and collaboration in organizations, Ensemble Enabler has developed the practice of visual enabling which relies on the disciplines of Organizational Network Analysis, simultaneous graphic recording, group video compilations and participatory dialogue to "visualize" what is happening (or not happening) in a network zone.

Why do we call this Network Leadership Development process a Leadership Reconnaissance?

A Leadership Reconnaissance is a momentary picture of the current state of a critical network zone. These work sessions are not day long workshops, but a form of information gathering which is collected in the moment. This is followed by reflection on the meaning of the current picture of both personal leadership development as well as the project's status. Like software development sprints, the team members collectively develop the next steps in order to address the opportunities which have been made visible through the continuous feedback.

A Leadership Reconnaissance initiative is not necessarily limited to a one-time experience. A leadership group can convene at a later date to address a new business challenge as well as build upon their acquired leadership skills to reach yet another level of competency. This kind of initiative can be repeated several times throughout a year to inspire and document progress. 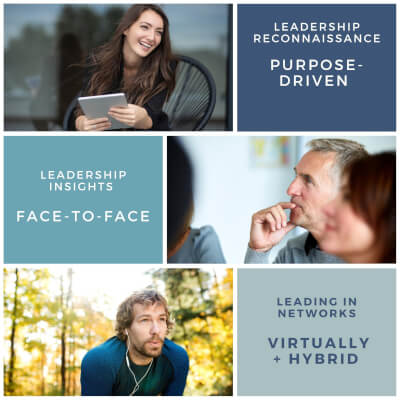 What does a Leadership Reconnaissance look like in practice?

• The starting point for the Network Leadership development begins with each member of the Leadership Reconnaissance team. The first step consists of a combination of a personal interviews with Ensemble Enabler combined an appraisal of his/her strengths. This serves to identify who each leader is when they are at their best.

• The kickoff face-to-face work session explores the fundamentals of Network Leadership as well as the attributes of leading a healthy organization. During this session the business issue at the core of the network’s efforts is clarified and the goals for the next steps to be undertaken in the workplace by the leadership team are defined (or if previously defined, revisited and confirmed)

• The members of the Leadership Reconnaissance team collaborate on the business issue together - either virtually or on-site - until the next work session with Ensemble Enabler.

• In preparation for the next session, Ensemble Enabler provides the members of the Leadership Reconnaissance with a series of questions for group discussion and reflection. The results of this reflection are visually captured by a visual enabler. This visualization of how things stand serves as a check-in for the next work session with Ensemble Enabler. This subsequent work session with Ensemble Enabler can take place either virtually or face-to-face depending on the needs of the team members as well as the status of the developments of the team's business challenge.

• This cycle of work sessions are repeated as the project progresses and complexity require. Each of the sessions (as described above) addresses different aspects of Network Leadership depending upon the current needs of the group.

• The end point of the Network Leadership development is a collective reflection of the leadership team members together with Ensemble Enabler to explore the learnings of the Leadership Reconnaissance from both a personal, team and business perspective.

Ultimately the true shift in leadership capacity occurs when leaders are able to "see" themselves and understand the consequences of their actions. 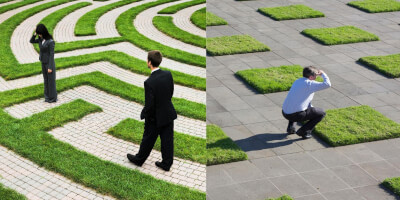 Example of a Leadership Reconnaissance Initiative

A Leadership Reconnaissance which serves as a leadership development process can be illustrated from the viewpoint of an automobile part manufacturer. It is in the process of shifting their manufacturing capability from components for fossil fuel vehicles to components for electric automobiles. The network relationships of an initial R&D team which is tackling the issue from an engineering point of view is insufficiently interconnected with component and raw material suppliers, production process experts and customers. This inadequate interconnectedness among colleagues throughout the system impedes the ability to foster the kind of vital organizational change which is essential. A Leadership Reconnaissance initiative supports all the network participants to collaborate with each other to enable this organizational transformation to occur more effectively.

A Shifting Leadership Metaphor for our VUCA world

Today's business challenges require a new approach to leadership. With the arrival of the digital era, a fundamental shift in the world of business has occurred. The familiar and traditional metaphor of a successful business as a "well-oiled machine" is not able to effectively address the broad spectrum of challenges emerging from our current VUCA world.

Digital transformation has highlighted the significance and influence of networks. The new and emerging metaphor for an organization is a "living network". The implications of this metaphor are profound for the way organizations perceive themselves as well as their unique approach to business. This new metaphor requires a mindset change in all employees but especially a transformational shift in how that leadership potential is cultivated throughout organizations.

The use of Leadership Reconnaissance provides a cutting-edge approach to enable businesses to champion these leaders within their organization. It enables leaders to engage in an agile manner with the evolving changes throughout the business environment.