I became aware of Holocracy in 2016 when I read an article in the German language newspaper Handelsblatt on the recent work of the distinguished Professor Gary Hamel who is known for introducing the concept of core competencies in the 1990s. This theory suggests that companies can build a sustainable competitive advantage by identifying and investing in the core processes that drive their business.

In more recent years, Hamel's work has taken a very different direction. He is concerned with the future of management. He believes that in many ways hierarchical management is actually impeding the generation of value.  Somewhere in the footnotes of that article which I was reading was a reference to Holocracy.

At the time, I didn't pay too much attention to the reference. When I eventually did look up the reference, I was intrigued. I purchased Brian Robertson's book on Holocracy (2015) and I am glad I did! In my opinion, the organizational framework which Robertson has developed over the past decade has the potential to revolutionize the way that we organize work.

Holacracy is a form of organizing work that is based on the principles of biology. An organization which adopts the Holacracy framework is constantly evolving in response to the needs of the business.

How does this look in practice? The work to be done is defined in a series of ROLES.  These ROLES are not people but actual tasks to be performed.  The ROLE itself may be filled by one or more persons.  A CIRCLE, on the othe rhand, represents an overall activity in which MULTIPLE ROLES can be grouped.  For instance, the ROLES of bookkeeping and financial reporting could be placed in a CIRCLE called accounting.

So far it appears that there is little difference between the Holocracy model and a more traditional hierarchical organizational structure. However the subtle difference is that ROLES are not people but the work to be done. For example: Initially one person could fill the ROLE of bookkeeping. As the organization grows and becomes more complex, this ROLE could widen to include more people. With further growth and complexity, the bookkeeping ROLE could become a CIRCLE which contains sub-roles such as accounts payable, accounts receivable, payroll, etc.  This bookkeeping CIRCLE would be embedded within the accounting CIRCLE. 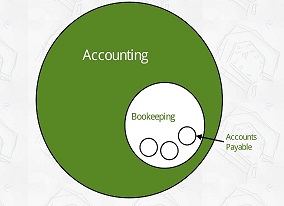 The accounting circle could also be embedded in a larger CIRCLE called Finance.

Here's the really radical difference:  Holacracy does not have bosses. It is a system of true empowerment.  Decision-making capabilities are part of the description of a specific ROLE. Within each ROLE, there will be decisions which the ROLE-holder(s) can take entirely themselves. However, other decisions will require that they get permission from other ROLES before making a decision.

The description and clarification of the decision-making power of ROLES is a constantly evolving process.  Unlike today's hierarchical organizations, every member of a Holocracy-driven organization is integrally involved in the process of designing the organization in which they work.  Members record what have been identified as TENSIONS (i.e. issues or processes that may not be working well).  These TENSIONS are addressed in CIRCLE GOVERNANCE MEETINGS.  Resolving TENSIONS will lead to repositioning existing relationships within the organization. As a result of these kinds of subtle shifts, a Holacracy-driven organization is constantly evolving.  There is no need for centralized re-structuring efforts which are undertaken in traditional hierarchical organizations.

You know that a concept or model is beginning to gain traction in business circles when it starts to appear in prestigious journals and reviews.  In the May 2017 edition of the Harvard Business Manager (German language version) Professor Erik Roelofsen and Tao Yue of the Rotterdam School of Management wrote the article "Is Holocracy the right way?". This article presented a case study based on an real company which was considering whether to adopt Holocracy as a way to organize itself.

Unfortunately,  Roelofsen and Yue's case study describes Holocracy primarily as an exercise in decentralization.  In this case study, a company explores the idea whether it should decentralize geographically (allowing individual business units more autonomy) or whether it should retain some kind of central decision making capability.

While this is an interesting business issue, Holocracy is not relevant to this discussion.

Why? In a Holocracy-driven organization both decentralization and centralization can exist simultaneously.  As argued in the case study about an actual construction company, embracing Holocracy would lead to a more decentralized decision-making structure and provide country businesses units more autonomy. On the other hand, critical processes could be centralized such as purchasing decisions which are made from a global perspective.  The CIRCLE in charge of purchasing could carry out all purchases for subsidiaries worldwide. Ethical standard supervision (an issue addressed in the case study) could also be centralized. Holocracy does not necessarily mean decentralization as stated in Roelofsen and Yue's case study.

In addition, three experts were invited to give their opinion on what direction the management of the company described in the case study should take. It is apparent that these commentators did not really understand the radical nature of Holocracy.  One recommended that the case study company should not adopt Holocracy because it is a one-dimensional system lacking in flexibility.  This statement couldn't be farther from the truth.

It is encouraging to see that Holocracy is beginning to be an issue worthy of discussion.  On the other hand, the case study revealed how many misconceptions about Holocracy exist.

If you are hearing about Holocracy for the first time, welcome to the discussion!  My conjecture is that the discussion about whether companies decide to maintain a traditional hierarchical structure or adopt holocracy principles will provide very interesting food-for-thought for all kinds and sizes of business in the years to come.

As Holocracy attracts more business supporters, additional case studies will become available. According to Robertson's book, currently the largest adaptor of Holocracy is Zappos - an online shoe and fashion goods retailer with ca. 2000 employees.  Certainly more companies will be added as time progresses.