The EKN division of E.O.N. - a German based energy company - convened a meeting in the form of a systemic dialogue in order to enhance employee engagement.  150 employees out of a total EKN workforce of approximately 800 participated at two locations - Hamburg and Landshut.  During the course of these meetings, multiple proposals were made that could potentially have a considerable impact on EKN's workplace.   However, over 600 employees were not able to participate directly in the formulation of these proposals.  How could these employees not only be informed of the potential proposals being considered, but more importantly also be won over to become part of the implementation of these ideas? 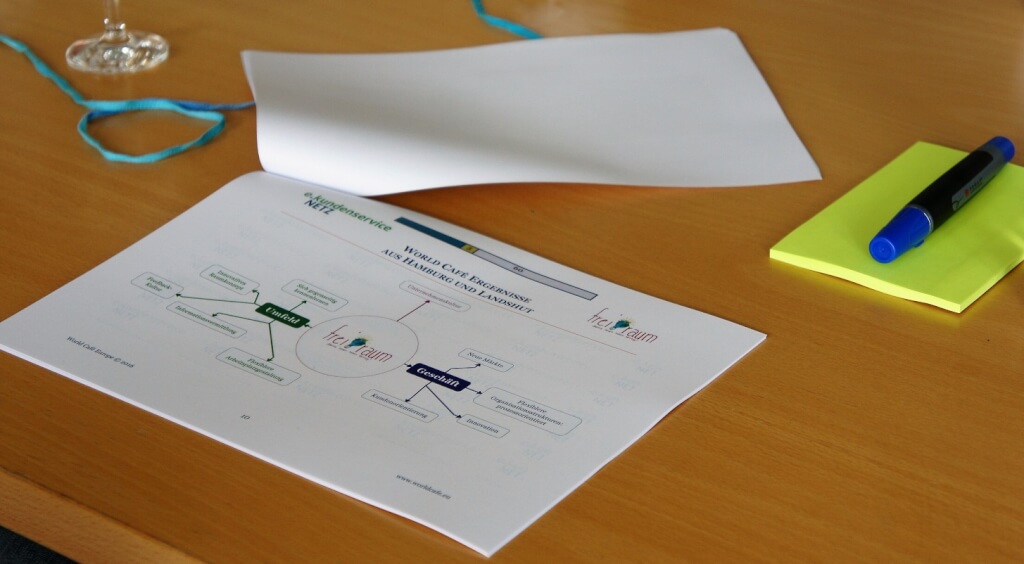 It was decided to use a Peer-to-Peer Networking process to quickly roll out the results of the two events. A Peer-to-Peer Networking process takes place in groups of 4 to 6 people to learn about a particular topic or theme in a timespan of 60 to 90 minutes.  By keeping group sizes small, the optimal conditions are created to foster individual participation. The conversation is guided by a pre-prepared script which is led by a certified facilitator. This person is usually an employee of the company who has gone through a 1 day certification process.

It is well known that learning styles and learning preferences differ substantially from person to person.  Some people may prefer to listen to a lecture, others to read a book.   Nevertheless two aspects are prominent in adult learning.  Participation is the first of these learning preferences. People like to have an active role in their personal learning experience, not just passively receive information.  A rich social interaction is a second imporatnt factor to encourage learning.  People learn well when they interact with other people.

Peer-to-Peer Networking embodies both of these aspects to foster learning.  During the 60 to 90 minute period, participants are encouraged to state their own opinion, not just receive information from the facilitator.  Participants understanding is also enhanced by listening to other people's perspectives.

Judith Kleer, one of the organizers of the Peer-to-Peer Networking sessions noted that the meetings were so informative and enjoyable that even the people who participated in the systemic dialogue meetings wanted to attend these discussions!

It is often said that we cannot communicate enough with each other.  Both change initiatives or Culture Renewal efforts require intense and personal communication.  However, many change efforts do not succeed primarily as a result of inadequate communication within the organization.  Peer-to-Peer Networking provides a simple and elegant process to offer a sustainable solution to this perennial communication conundrum.

Moreover, Peer-to-Peer Networking  contributes to creating a more affective work environment where business issues can be addressed with better emotional intelligence.   Bringing groups of people to talk about issues that matter to the company creates a unique sense of belonging and inclusion in the organization.