Weißbierpils - a metaphor for innovation

What is innovation? …AND how can we better foster innovation in our organizations?

A recent trip in the Bavarian countryside provided me with a wonderfully simple example of what innovation is and what it takes to make it happen.

As I was driving back to Munich after an extended business trip in the north of Germany, I stopped for dinner at a charming and modestly simple local restaurant in the town of Amerdingen. The weather was warm enough on this early autumn day to permit sitting outside on the terrace. Meticulously taken care of was the garden where benches invited overnight guests to linger.   What particularly caught my attention however was not the garden but an unexpected item on the menu. In addition to the normal variety of beers which can be seen on any menu in Bavaria, there was a new offering that I had never seen before. It was a combination of a Weizenbier (or wheat beer) and Pilsner – two types of beer not normally associated with each other.

Weizenbier (known “Weißbier” in Bavaria) came into existence in Bavaria in 1548 and was a valuable long – term source of income for the royal house which kept a monopoly on its production well into the 18th century. Pilsner has its origins in the town of Plzen in the Czech Republic where it was first brewed in 1842. It typically has a higher alcohol and hops content than Weizenbier which gives it a very distinct bitter taste. It is the beer of choice in most of Germany – particularly in the north – but has not been quite as popular in the southern parts of the country.

The restaurant in Amerdingen offers a new drink which they call the WEIPI (pronounced VAYPEE) – a combination of Weizenbier and Pilsner. After further reading it turned out that this particular restaurant was the first to bring this beer on the market. Intrigued, I immediately ordered a WEIPI. It was a wonderful surprise. To quote a description from the German beer institute, the Weipi combines . . . “what some believe is the best of both possible worlds, namely the Weissbier’s fruity-spicy notes and the Pils’ clean-tasting, assertive up-front bitterness.” 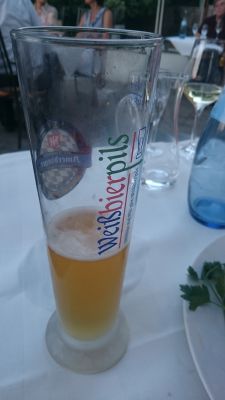 This intriguing drink provides a remarkably simple metaphor for innovation. In his book “The Nature of Technology”, Brian Arthur – an award winning economist – highlights the seemingly intuitive fact that the overwhelming majority of innovation stems from the combination of already existing technologies (the other source of innovation stems from the discovery of new laws of nature – what Arthur calls truly fundamental innovation.) Since most of us will not likely discover new laws of nature, the combination of existing technologies is probably going to be the surest path towards innovation for us.

The WEIPI embodies this principle in a simple and elegant way. Two existing beers came together to create a new concoction. The iPhone from Apple is another example of this concept. All of the necessary components existed already in some form – touch screens, application software, non-scratch glass, etc. The genius of Apple was to see the possibilities of this new combination. When I worked for Sony on leadership development, the managers there told me that Sony had had at their disposal all of the elements necessary to have been able to pioneer a product similar to the iPhone, but they were not able to see the possible combinations themselves.

At Ensemble Enabler, we support our clients in their drive towards innovation by creating the optimal conditions for a dialogue designed for a large number of people to share their unique perspectives on an issue. This interaction enhances the organization’s capability to see those potential new combinations that can result in product and/or process breakthroughs.

The other aspect of innovation that the WEIPI example highlights is the importance of leadership. Bringing to life a new combination requires vision, steadfast belief, and perseverance. WEIPI’s unsung champion is Hubert Brandl from Pfaffenhofen an der Ilm who dedicated several years before finding the right process to create this new beer. This process was not so simple. Weizenbier uses a top fermentation process while Pilsner requires a bottom fermentation process. Also the final 53% Weizenbier, 47% Pilsner mix was not obvious. Brandl had to hold steady in his belief that this endeavor was worthwhile, probably in the face of criticism and potentially even ridicule.

The WEIPI is now officially recognized as the newest beer style in Germany by the German Beer Institute. Besides Amerdingen there are 12 other breweries marketing this new creation. Prost!